Of all the weddings we've ever seen, here are some of the strangest marriages which occurred in the world.

Marriage is an event that unites two people in a single link. But in reality, not just marriage takes a couple of human beings, but human beings and objects.

Of all the weddings we've ever seen, here are some of the strangest marriages which occurred in the world.

Erika, 39, a former soldier who lives in San Francisco. He has long had experience of falling in love on the objects.

The first time, Erika crazy about Lance, a bow that helped her become a world-class archer. His love and then switch on the Berlin Wall. He even claimed to have a physical relationship with a piece of fence that he kept in the room.
But the Eiffel Tower, Erika's last choice. In the midst of a simple wedding attended by close relatives on June 4, 2008, she give love and promise faithfully.

As quoted by the Telegraph, since the wedding, he was deliberately using the name Erika La Tour Eiffel. "I just do not understand how many couples can have children from their relationship, but eventually abandoned," he said.

Liu Ye, 42, male origin Zhuhai, China's so in love with himself. To the point, he was desperate to hold a traditional wedding with herself in front of over 100 guests invited.

He perpetuated his image on a styrofoam board with the bride dressed up like a red dress. "There are many reasons for marrying myself, but mainly to express their dissatisfaction with reality," said He.


He denied the allegations of some people that he is gay. He did it 'crazy' is just to express herself as a narcissistic. "This marriage makes me whole again my definition of marriage different from others," he reveals the reasons for marrying myself.


wedding ceremony is a sacred place of the traditional Chinese society. Attended the event to accompany the bride and groom stock. All the tradition they follow, in order to honor their ancestors and the foreign presence. 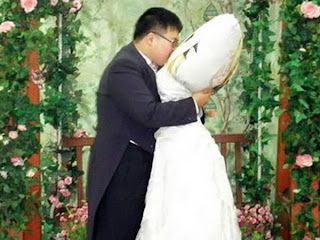 Youth 28 years old, dubbed 'otaku' (obsessive and weird combination) is married to 'bride' is a show with an international wedding dress. Strange wedding was held with very serious, complete with a priest in a special ceremony. No wonder if this strange marriage received wide publicity from various media.